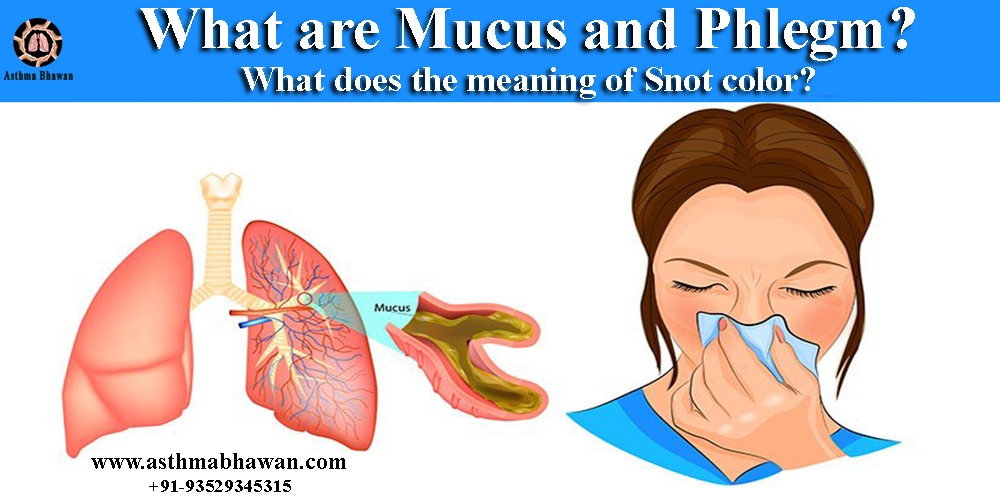 What are Mucus and Phlegm? What does the meaning of Snot color? As we enter cold and allergy season, many people suffer from much more sneezing than usual. It may be insensitive, but a small amount of blockage is not a cause for concern. However, depending on factors like the harshness of the blockage and the tint of the phlegm, it can be a sign that more severe issues are at hand.

Mucus is another name for snot. Snot, especially in your nose, serves as your body’s first line of defense against infections and other undesirable things that might try to enter your body. It traps particles and organisms, preventing the bacteria or debris we breathe in from entering our lungs directly. Although doctors rarely use nasal mucus as the primary diagnosis of disease, it can provide information on other conditions. The color of this snot can tell you a lot about what is happening inside your nasal passages.

What are Mucus and Phlegm? What does the meaning of Snot color? Asthma Bhawan

Snot color can indicate a class of conditions, including allergies, nosebleeds, colds, or a sinus infection. The color of your, snot may change, which is almost a primary sign that something is wrong with your health. According to the Asthma Bhawan (Best Asthma Treatment Hospital), the implications for your health of the different shades of snot.

How does the color of your snot indicate your health?

According to doctors, if you suffer from snot color changing, you need to see what else is going on. It’s the urge that everything was going well for you and that nothing bothered you until it changed. You have to consider what else might have changed more comprehensively. Do you feel sick right now? A significant change in your environment could be a reason.

The color of the snot, or changes in the snot color, is only one indication of a possible health issue. Your snot’s consistency might also be a red flag.

You can also read: Best Allergy Hospital in India.

The meaning of each snot color is as follows:-

Keep in mind that the color of your mucus can give you a general idea of what is occurring inside your body, but it does not suffice to make a diagnosis. However, you should see a chest or lung specialist if you are experiencing unusually high mucus that is escorted by other symptoms and get more information about What are Mucus and Phlegm? You no longer need to be concerned if you need professional assistance. Consult with one of India’s top chest experts at asthma Bhawan or give us a call on +91-9352934531.